Is the railroad industry ready for stronger storms and more extreme weather? 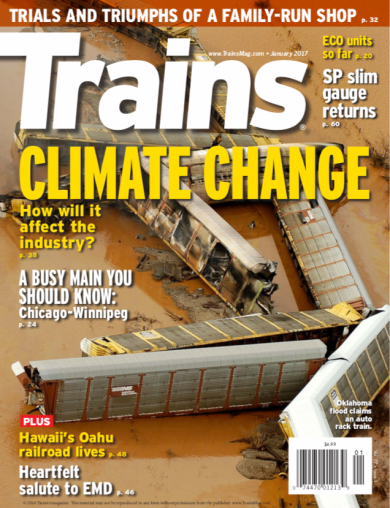 Every weekday, more than 5 million people ride the New York City subway, one of the busiest transit systems on earth. Twenty-four hours a day, seven days a week, 365 days a year, hundreds of trains connect 469 stations in the city’s five boroughs on 24 lines

But at 2:18 a.m. on Monday, Oct. 29, 2012 — as a massive hurricane swirled off the east coast — the entire New York City subway system came to a screeching halt. It was only the second time in the system’s 108-year history that it was shuttered due to a storm.

Later that day, Hurricane Sandy made landfall, pummeling the Northeast with wind, rain, and waves. As the storm hit New York City, tunnels flooded and road- beds washed away. The 1.9-mile Montague Tube connecting Lower Manhattan with Brooklyn was inundated with 27 million gallons of seawater and was closed for 53 days. The Greenpoint Tube connecting Brooklyn with Queens was shuttered for 10 days after flooding with 3 million gallons of water. Heavy winds and waves destroyed a 3.5-mile stretch of the A Line across the Rockaway Flats, disrupting service for seven months. In the end, Hurricane Sandy caused more than $4.75 billion in damage to the subway system.

Railroads and transit systems have been battling the elements for as long as they have moved people and goods. But stronger storms, like Hurricane Sandy, and extreme weather events have pushed the industry to the mat on more than one occasion in recent years.

A year before Hurricane Sandy, in August 2011, Hurricane Irene slammed into New England, shutting down more than half of the Vermont Rail System for three weeks after washouts and flooding devastated the railroad.

In summer 2012, record-breaking temperatures across the country resulted in numerous rail-buckling derailments, forcing the Federal Railroad Administration to issue a warning about “sun kinks.”

In March 2014, BNSF Railway’s main line to the Pacific Northwest was closed twice in one week after a series of avalanches blocked the tracks on Montana’s Marias Pass. The slides came at the height of one of the coldest and harshest winters the region had seen in decades and brought the Class I road to a halt in the northern part of the country [See “BNSF’s Winter to Remember,” August 2014, and “Railroading in Avalanche Alley,” December 2015].

Eighteen months later, the same BNSF route along Glacier National Park was closed again, after a massive wildfire threatened to burn down a double-track bridge, a wooden snow shed, and the entire town of Essex, Mont. The fire was one of hundreds that burned across the western United States in summer 2015, during one of the biggest wildfire seasons in recorded history. They scorched more than 10 million acres in what one U.S. Forest Service official ominously called “the new normal.”

With bigger storms and extreme weather events as “the new normal” — and scientists warning the trend is not about to slow down anytime soon — is the railroad industry ready to deal with the impacts?

This story appeared in the January 2017 issue of Trains Magazine.